I'm not 100% sure how in the world it is mid-October already, and I'm not sure why I have not updated with a single project since March.  EEP!

I had a preliminary basement plan wast winter that I listed here.

Since then I did make some slight changes, but never actually reworked the plan.  Then, despite having the summer off, I did not touch a single part of the basement.  In my defense, it was a very busy summer!  We went to Disney, I moved to a new school building, celebrated my 20th high school reunion, and my husband and I both had professional development opportunities that took us away from home for several days each.

Here's a really awful panorama of what we started with.  It's about 400 sq. ft of space total, but because of the electrical box area, heater/water heater area, and water pump area, it'll be closer to about 350 sq. feet of finished space.  It's not a lot of space, but perfect for a boy cave and mini-workout area.

My first brilliant idea was to work around all of this.  Cover a few things, paint, move stuff, repeat.  What was I thinking? That was taking forever.  And paint in the spray gun?  It goes EVERYWHERE.  This is the corner where it all began with the Zinsser Oil base primer.  Which I abandon after about 2 hours because the basement does not have good ventilation.  I switched to the latex version. 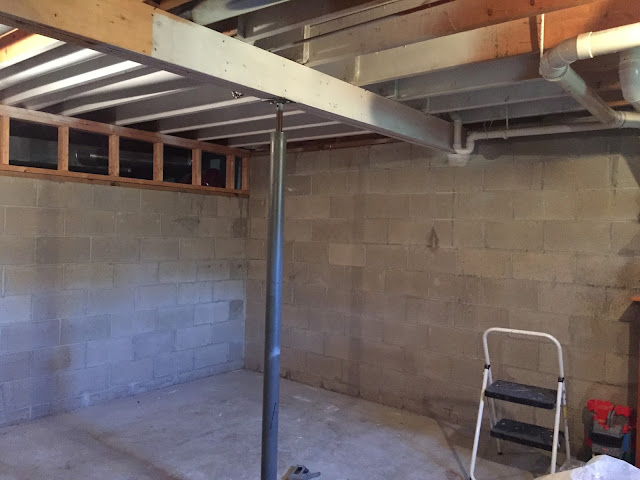 Then I used plastic to cover all of the areas I wasn't going to need to paint.  That worked a lot better. 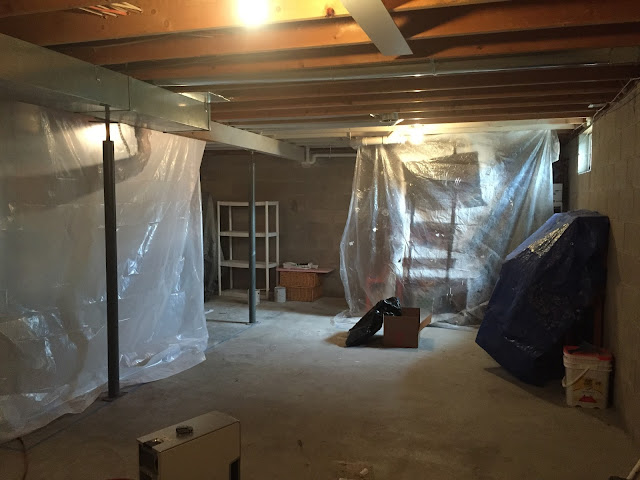 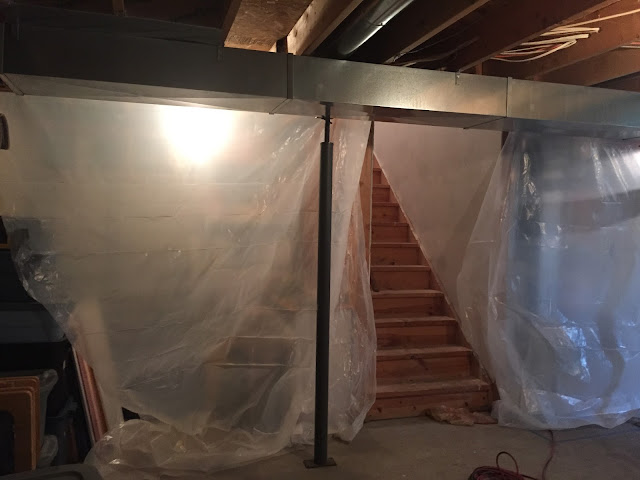 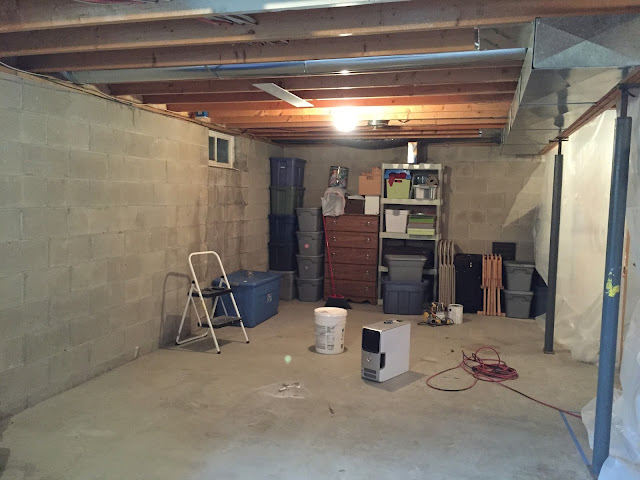 Don't worry, the water issue around that window has been fixed.

Then the issue was what color do we go with.  I really wanted white.  Our ceilings are a mere 7'2" so it's fairly dark down there.  But, when I switched to the latex, I just wasn't getting the tannins in the wood to cover.  The pipes were bright white and then the wood parts of the ceiling were a yellowed white.  So I gave up my dreams of a bright, white ceiling. 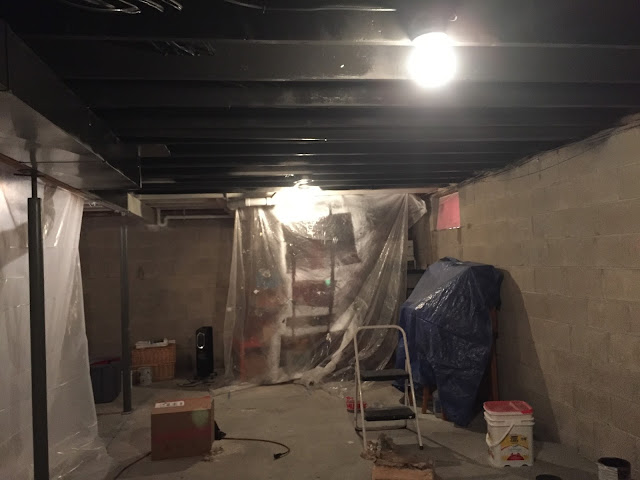 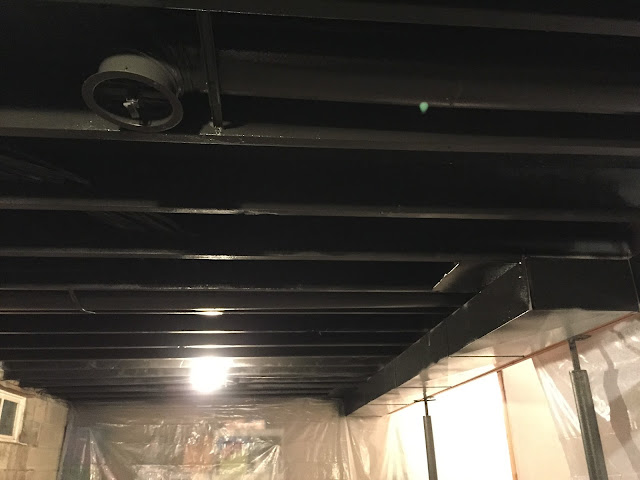 The flat black went on so smoothly and masked or covered every little issue that existed in the ceiling. 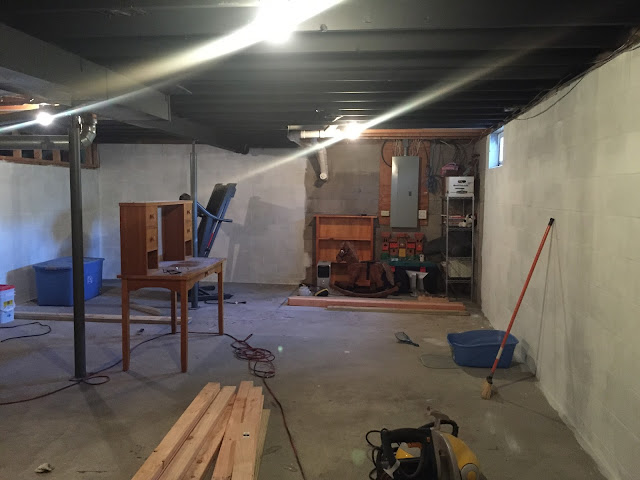 Once the ceiling is lit with more than two bare bulbs, I'm sure that this will be the best solution.  I just knew that every time I looked up, I'd see all the issues with the white.  They are virtually invisible with the black. 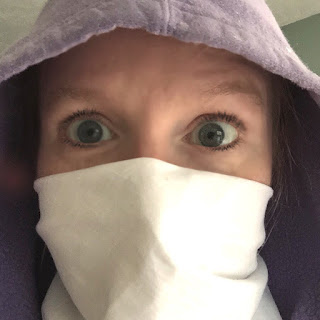 I finished the black last weekend.  I spent several weekends like this, so it was good to be done with the spray gun.  The gun I was using was a  Wagner Flexio.  I bought it last summer to use on my cabinets, but I didn't like the spray pattern I was getting and retired it in favor of a brush and roller.  I was thankful I had it for this project though!

Of course, I've noticed a few areas since then that I missed.  So, chances are I'm going to have to buy another gallon and do some touch ups.  That's unfortunate.  I thought I was done with pepper colored freckles and having black boogers.  Ew but true.

I started with waterproofing the walls last weekend as well.  First I washed them down with muriatic acid and then I let them dry.  Afterwards I covered them with a coat of Behr Waterproofing.  I went through lots of reviews before settling on this one.  It hasn't rained since so I do not know how it will work, plus, most of our issues were from that window mentioned above. 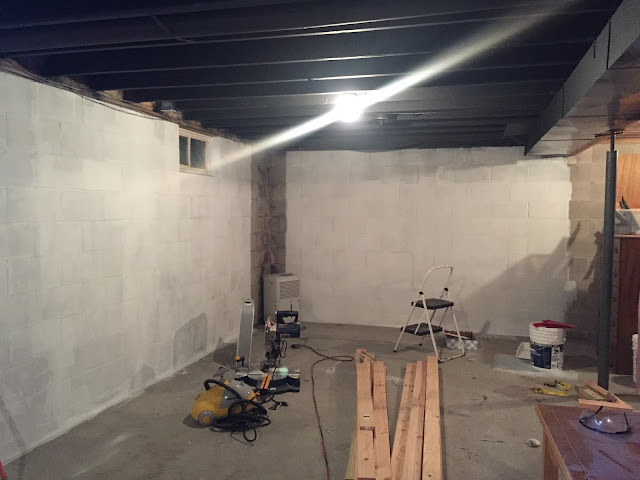 I saved the areas that won't be covered for later.  The waterproofing wasn't exactly cheap, so I wanted to make sure to get two coats on the areas to be finished before worrying about anything else.  That last corner I rediscovered after moving my tower of Rubbermaid boxes.  The previous renters had pushed all the snow off the roof onto the deck in that one corner and of course it leaked when it all melted.  We haven't had any issues with it since then because we keep the deck shoveled off in the winter.

While we were at Home Depot, I picked up a bunch of 2x4s to start the interior framing for the various closets.  I don't exactly know what I calculated though because I bought almost exactly half of what I needed.  Oops!  I bought a framing nailer to make the job go faster, but I knew it wouldn't be here by the weekend.

As (bad) luck would have it, my four year old ended up with a virus taking her out of school for 3 days this week.  I've been home with her the last two, and my nail gun made it here.  That sucker is big and a bit intimidating!  Framing the wall was really easy though! 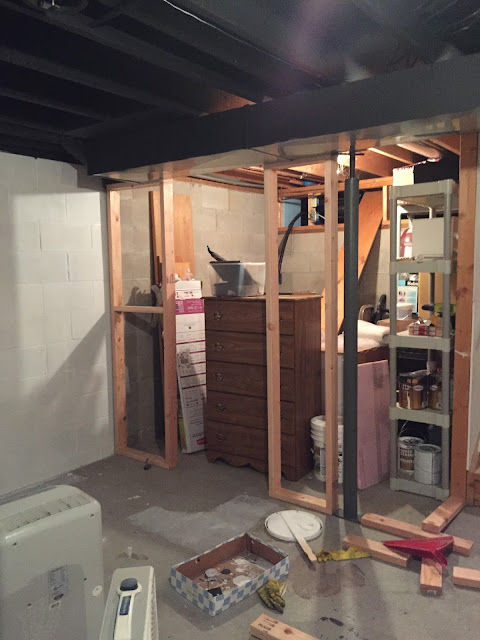 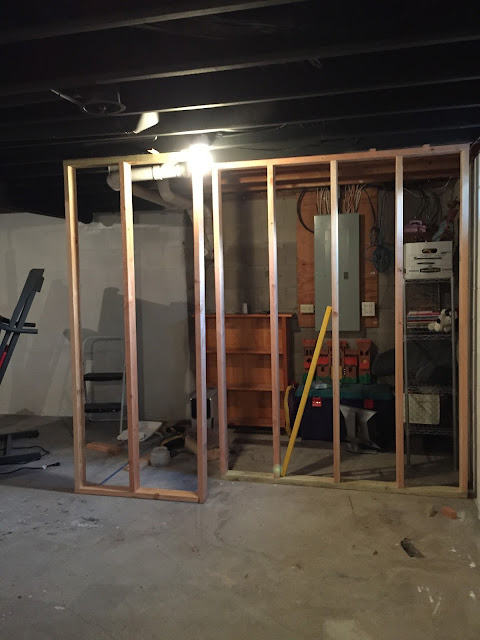 I put the one part of the wall in upside down! Good thing nothing is nailed in place yet.  It's all just shimmed into place for now because obviously I want to get all the exterior walls in place first.

That brings me to today.  I ordered the product we are going to use on the walls today.  For a few hours yesterday I priced whether or not to go with stud walls or the product I ended up ordering.  For various reasons, time being one of them, I opted to go with InSoFast for our walls.  In about one to two weeks, I will have a basement update.

Budget: $3000 (up from my original estimate of $1800)
It's going to be TIGHT to get it done for this especially if I buy new furniture. 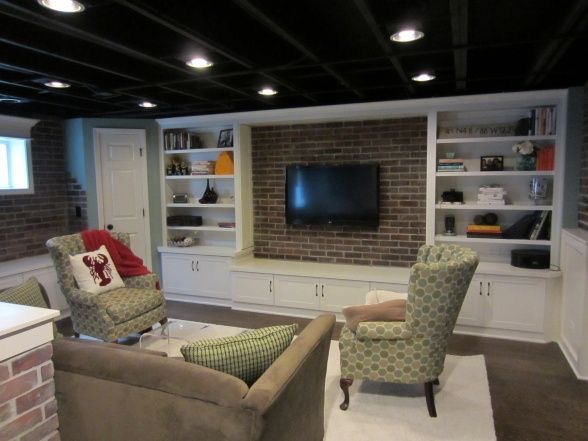 Email ThisBlogThis!Share to TwitterShare to FacebookShare to Pinterest
Labels: basement, before and after, diy, renovation