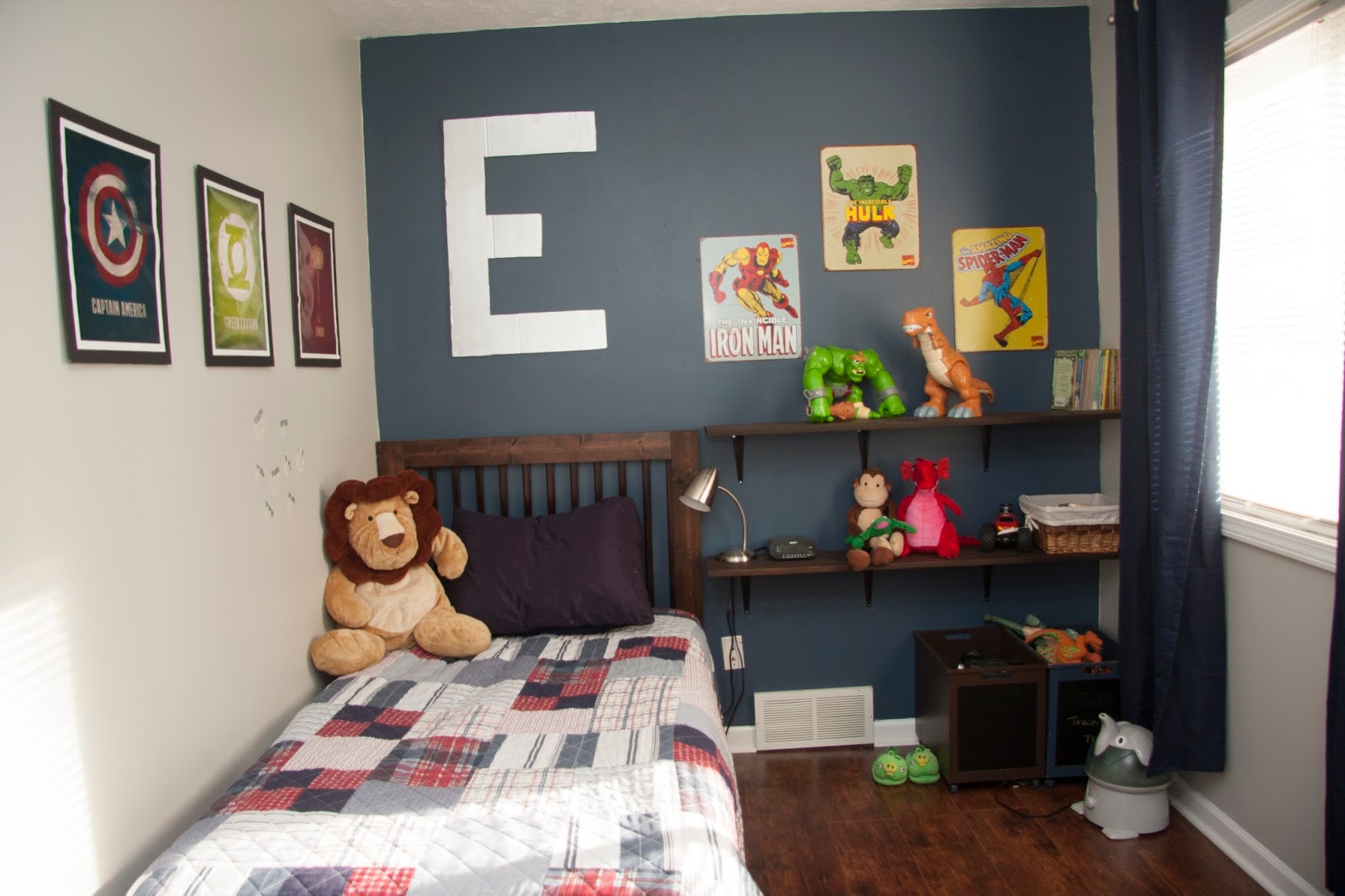 We have been working like crazy people still trying to pull everything in the house together.  We have just about one month left before school starts up again.  EEK!  Even less time than that really since Erick will be teaching two weeks of summer school in August, and I have a three day Professional Development thing coming up.  Pair that with upcoming football practices and the August back to school prep, and we are feeling the crunch!

Aside from our bedroom, most of the rooms have made considerable progress since my last update.  I need to take room by room pictures this week for a proper update.  One room that we've spent a bit of time on is Evan's.  He still feels slighted that he has the smallest room of the kids.  Ugh.  We thought they'd all be happy they HAVE their own rooms.  He's sulky and looks pathetic with his big eyes when he gets all sad at you, so one day we decided to spend a bit of extra time in his room spiffing it up.  (That's right, I totally just made the word spiffing cool again.)

We have a really tight budget this summer, since we are trying to keep a decent savings account for actually purchasing the house we are updating.   That means weighing options and trying to reuse things where we can.   When we pull something apart or replace doors, I try to find another use for them. 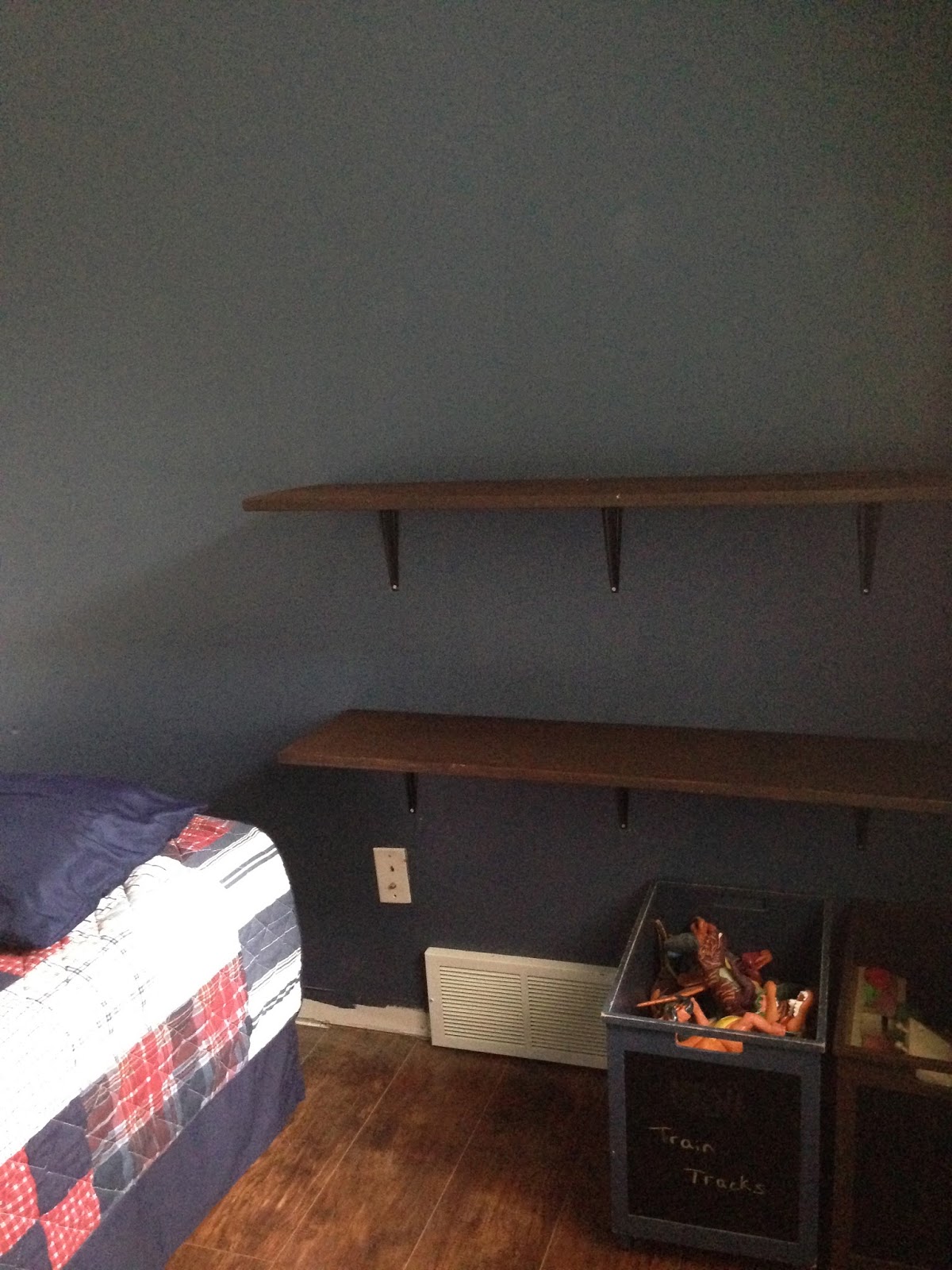 When we put Evan's closet organizer in, we removed two 1x12s and a metal bar.  The boards were in decent shape - with no warping, so I saved them.  I originally wanted one of those cool pipe shelves that look so awesome on Pinterest.  The issue is, Evan would use them like a ladder.  The other issue was that I priced out the pieces and it would have run about $350.  I opted to give up that idea and instead bought 6 shelf brackets for a total cost of $12 on this project.

All I did was sand all the paint splatters off of the boards, and then rubbed them down with the General Finishes Java Gel stain and then let them dry.

After that was done.  I had this picture to the left.

I had no original intention of giving Evan a headboard.  However, my original plan was shelves running up the wall and then over the bed with a cool light fixture mounted over his head.  Since that was part of the $350 plan, it was out.   But now his bed just looked sad, like it needed something.  So the search was on for a headboard.

My original plan was the 1x4 headboard I had seen on Pinterest.    But, I wanted to do the project NOW, without driving 30 minutes each way to Home Depot, and I didn't have enough 1x4s to make one.

What I did have were the parts to a crib and a few 1x4 scraps leftover from the board and batten project.

I pulled one of the crib sides out, measured it agains the bed, cut off a few slats, trimmed down a few of the 1x4s and it looked pretty good.  At the slim price of $0, it was a winner! 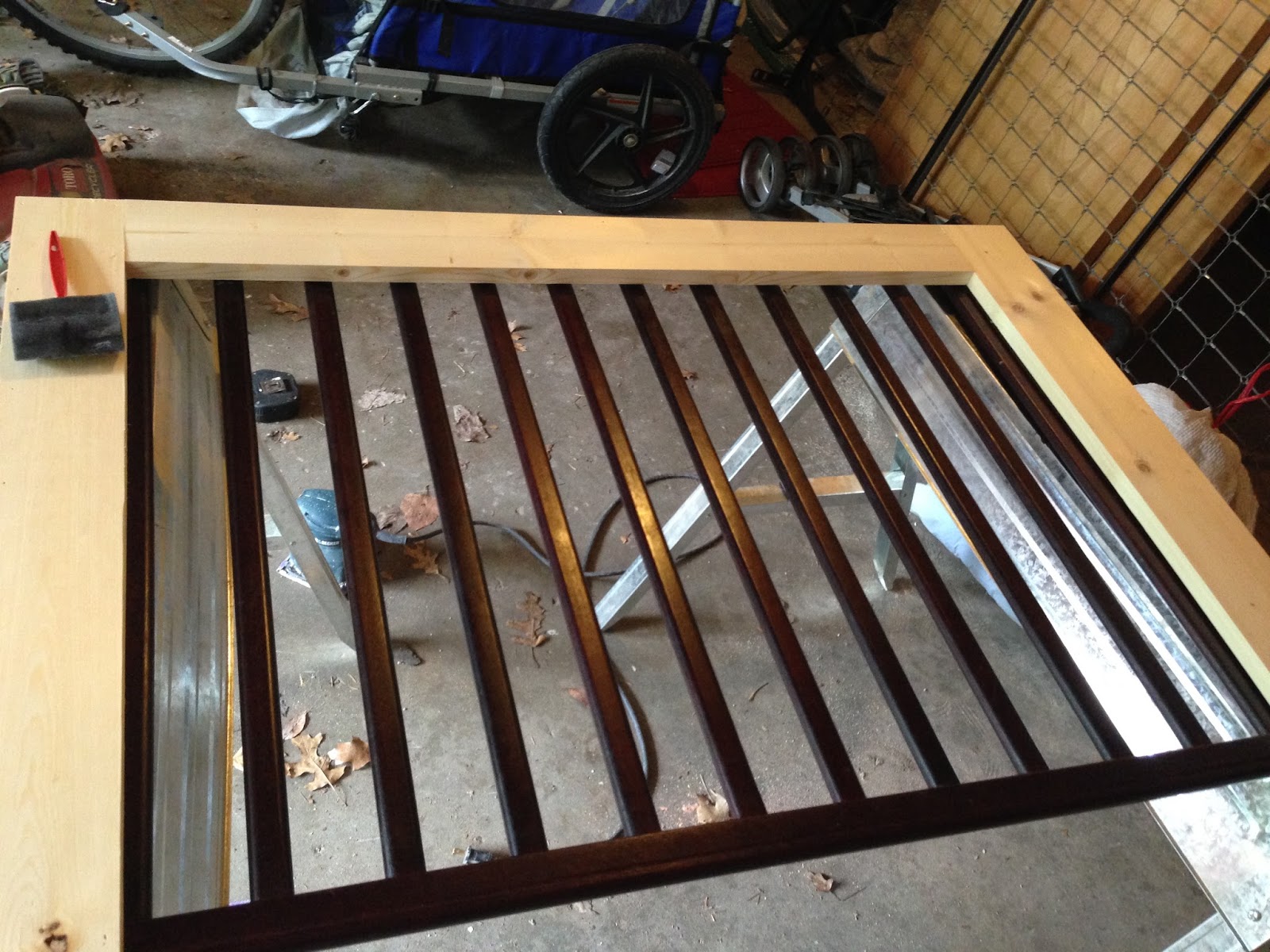 After that, it was just a matter of taking the nail gun to the pieces.  Easy peasy.

Once it was all nailed together, I laid it out on the sawhorses and pulled out the gel stain again. 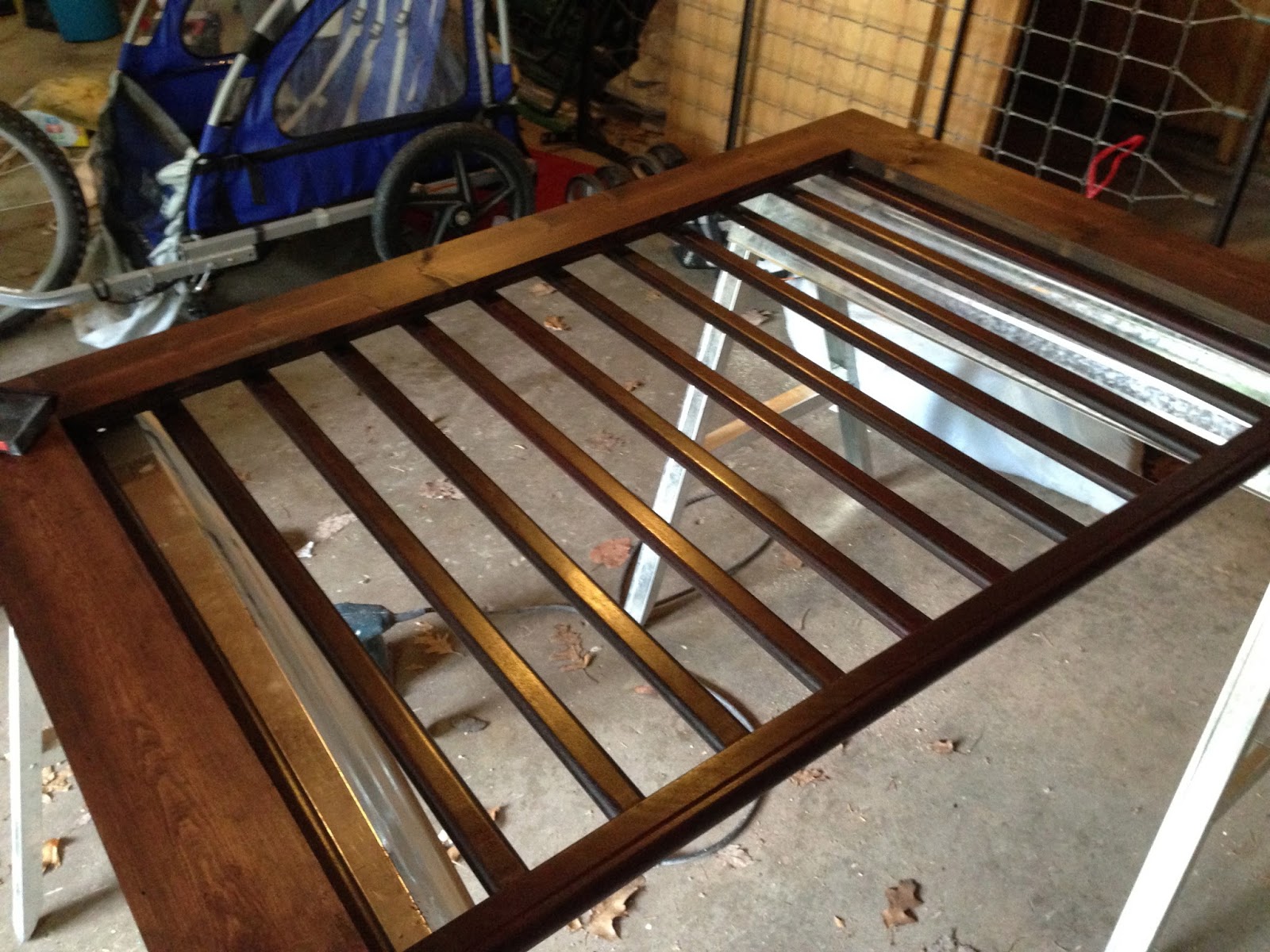 The crib, was dark to begin with, so I just had to fill in a few gnaw marks from the three little hooligans that used this crib.


I did not get pictures of hanging this. We went the easy way and hung three picture hooks on the back of it. We nailed into studs and hung the headboard that way.  It hasn't been an issue at all.

It looks much more finished now with the headboard than it did without it. 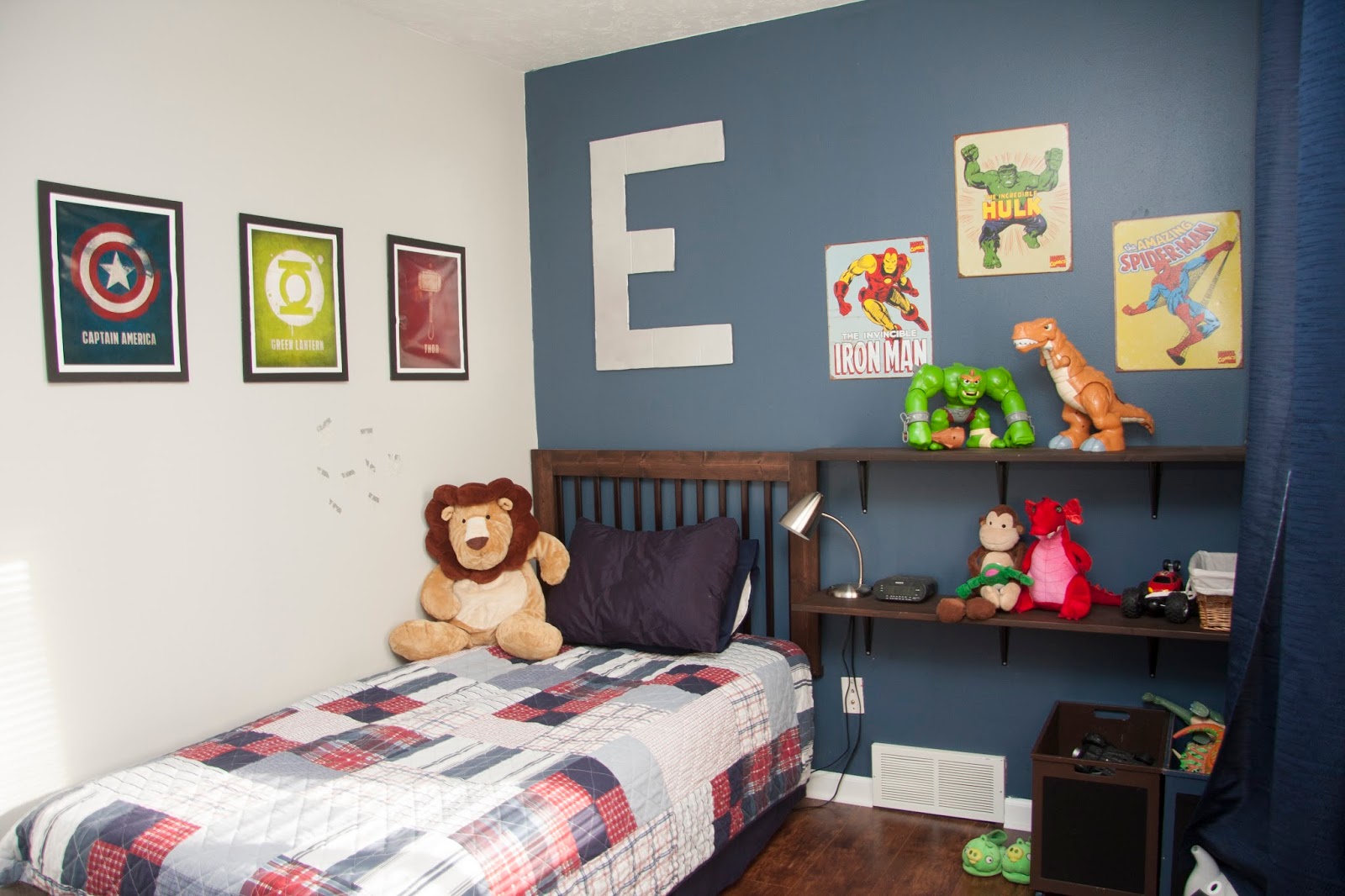