When we moved into this house, the first bedroom was an "under the sea" bedroom for a little boy, except with dusty rose pink carpeting.  Isn't that a lovely image in your mind?  I did not take pictures of the whole package, unfortunately.  Here's a sneak peak at the motif though, mid floor laying. 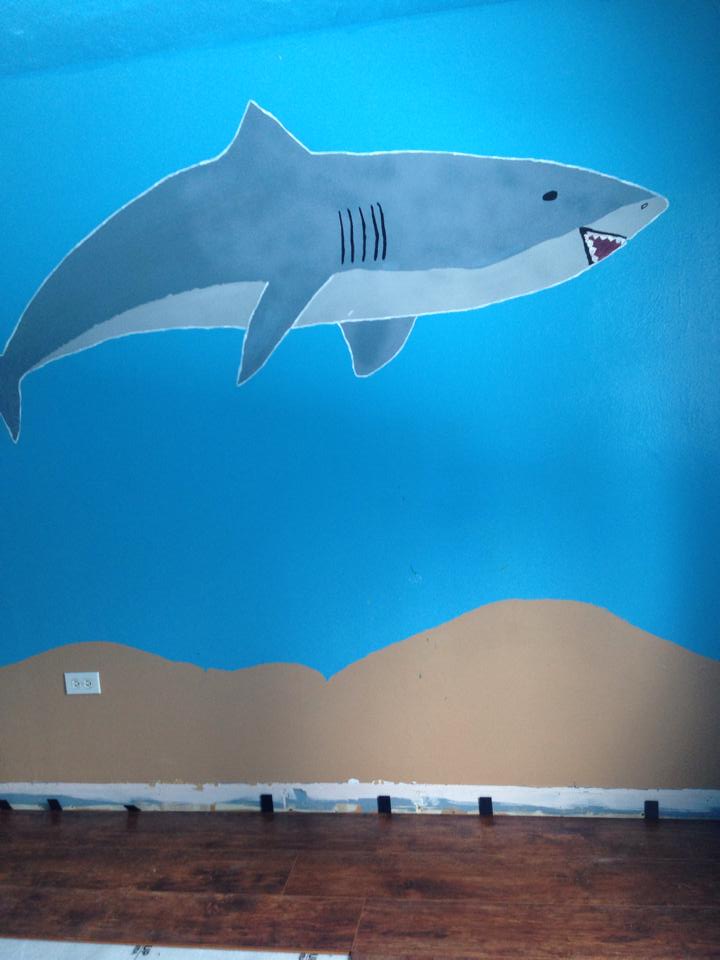 Please note, not only are the WALLS blue but the ceiling is too.  Delightful.  However, the REAL issue is the tan there near the floor.  That my friends, is textured paint.  Like don't rub against it or you'll end up with abrasions, textured paint.  Sigh.

First I tried sanding it.  No go.  Then I tried steaming it and then sanding it, better, but not smooth.

Next, I turned to my friend Google.  Google, I asked, what does one do when they have a heavily sand textured wall.  Google's favorite answer?  Put up 1/4" drywall.

It was about that time that I remembered pinning some board and batten treatments on Pinterest.  My original thought had been to use it in the long hallway to add interest, but then I had a thought…

Why don't I do the board and batten in here instead? 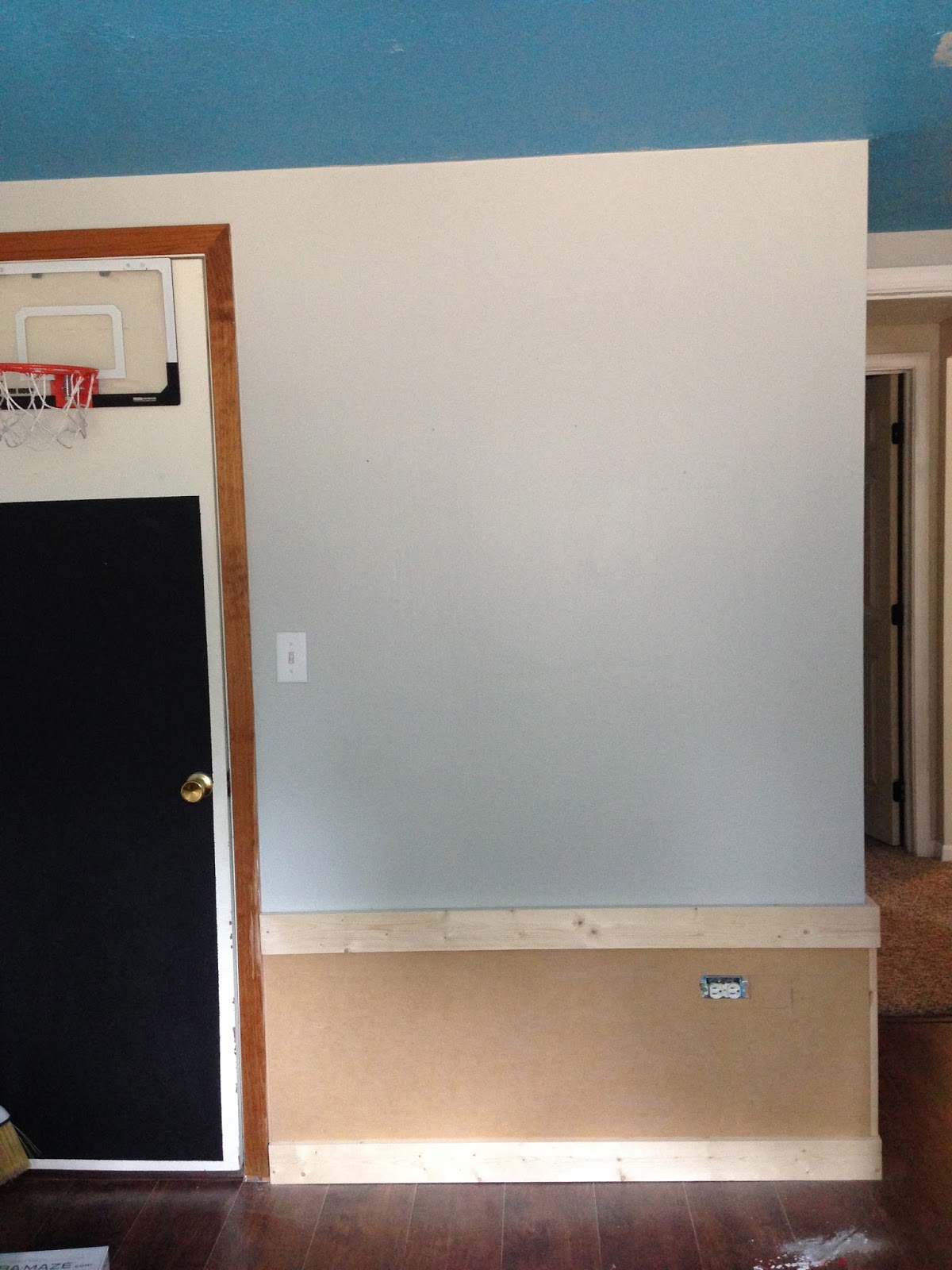 This was originally supposed to be like an April project.  When my parents helped us move, my dad was going to help me get the board and batten done in this room.  He was a bit of a downer about it telling me it wasn't going to be easy, there would be lots of issues with finding studs and spacing evenly, etc.  Alas, it did not get done in April.  At least not most of it.  It was a project that took a long time, not because the project itself was difficult, but we have three kids, two full-time jobs and a lot of other projects going on at the same time.    Around the end of April, the room looked a bit like this.

We decided to go with 2' board and batten, mostly because the boards were 4x8 and splitting them up the middle was nice and easy.  We used the back of cheap paneling, but there are a lot of different options out there.

Finally, one weekend in May when our oldest, the occupant of this room, was at a birthday party, I decided to rock out the rest of it.

We used 1x4s for the top and base, and 1x2 for the middle pieces.  Then the whole thing received a coat of white paint, followed by about 2 million tubes of caulk.  Then I went over it again with a second coat. 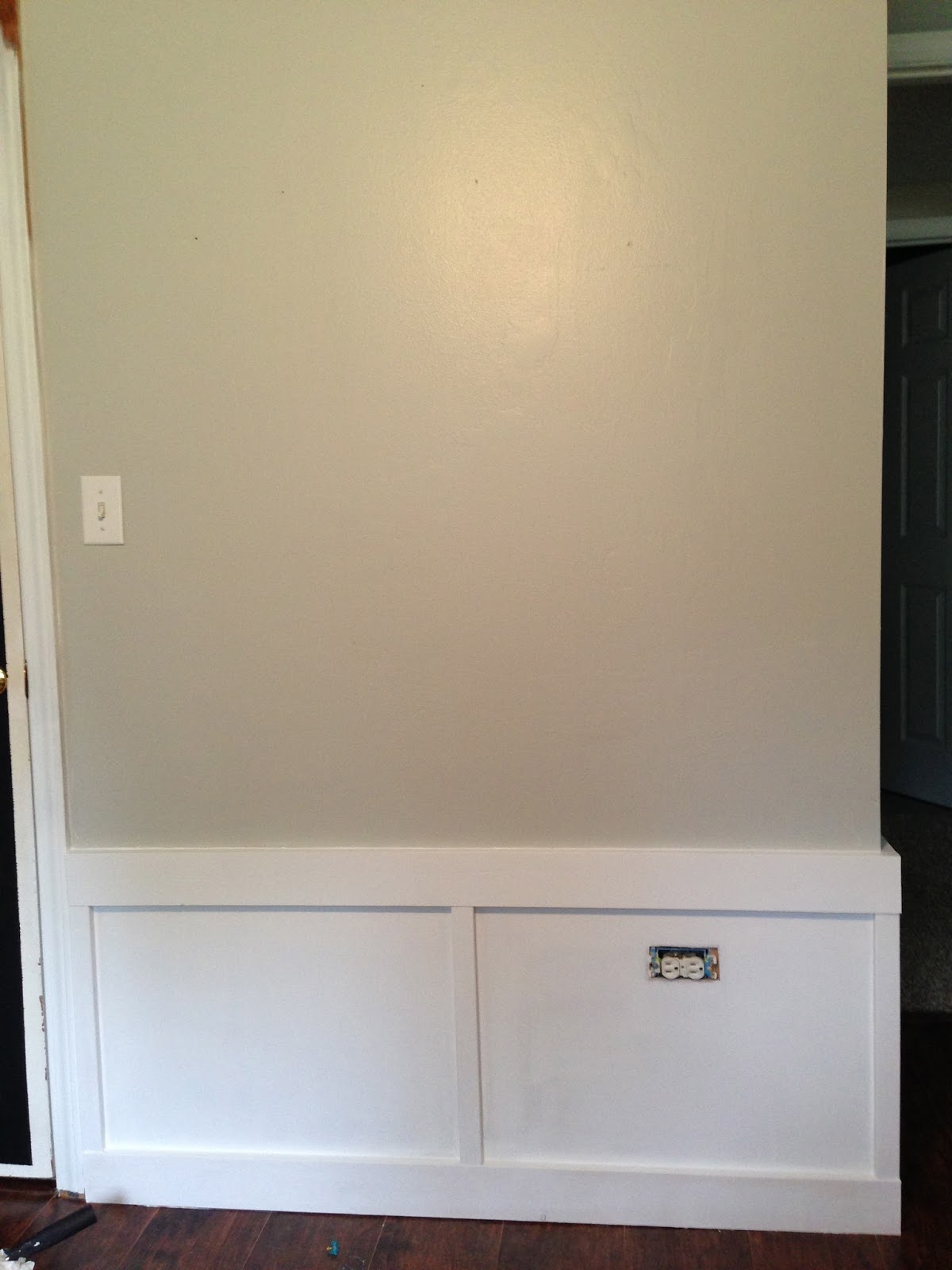 Here's the wall after one coat of paint and the caulking done. 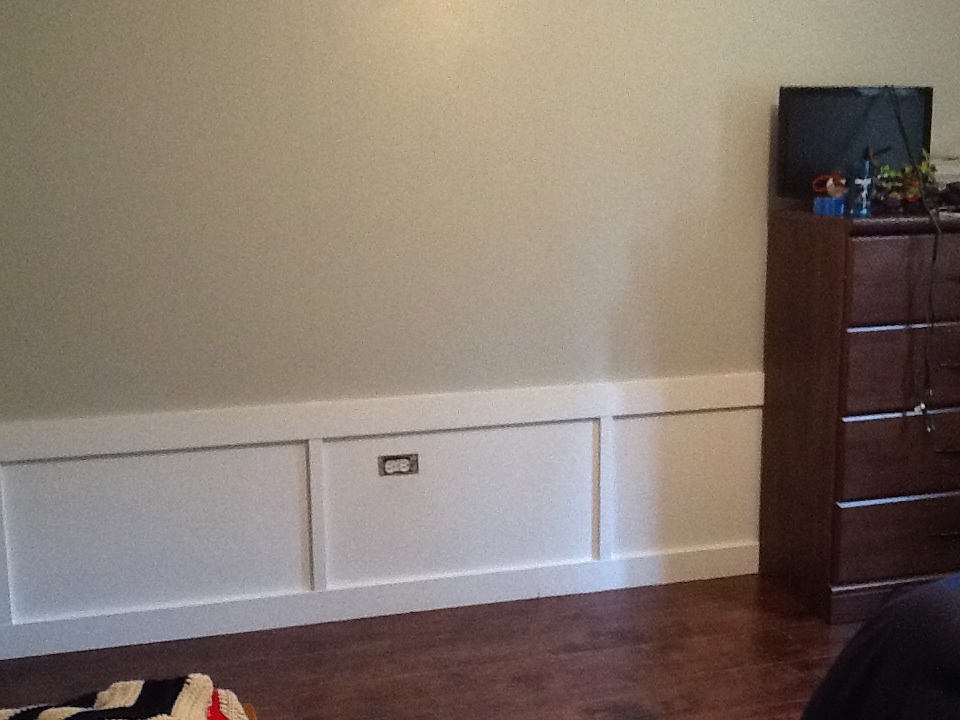 This is the "shark" wall from the original picture.

My dad was right in a few ways.  The verticals are not really nailed into studs.  We contemplated using liquid nails, but between the caulk and the brad nails from the nail gun, I feel pretty confident that they aren't going anywhere.  (p.s.  I would have only used liquid nails as we put up the smooth board behind; I'd never recommend liquid nailing to your drywall).  Secondly, the verticals are not exactly evenly spaced around the room.  If you look at the photo above and then the photo to the right carefully, you will notice that the spacing isn't even.  The two long walls have spacing about 32" apart while the short walls along the closet and the window have a 24" spacing.  Once all the furniture was loaded it didn't really matter.   This is just a 11 year old boy's bedroom, not royal chambers for the queen.

Excuse the photo quality here, these are from the panoramic feature on my phone, but it gives you a good glance at the whole scheme.  No more sandy walls, and no more blue ceiling!

This room is not finished yet, but I tend to do something in a room and then move on to something else.  I have total project ADD.  Next up when I get back to this room is putting the spacers in to bump out the outlets, so I can put the covers back on.

Here's the view from the other corner.

Overall, I am very happy with how it came out.  It looks pretty swanky for a boy's bedroom.

I wanted to keep meticulous track of what I spent on projects, but I haven't.  oops.  It was under $200 for the supplies for the board and batten.  I have two 4x8 sheets of the paneling used for the flat surface left over.  I also ended up with lots of 1x2s left over, and I used at least 4 of the 1x4s on the banquette project i the kitchen.  I'd say the true estimate was closer to $100.
Posted by Carrie C at 7:44 PM