Huh, I didn't see that one coming

If you read my last rant, err, post about working on the house, you will not believe this one.   First of all, not only did we end up with one showing in the dead of winter, but TWO.  Unfortunately, we had to call and cancel the second one because it was scheduled for right in the middle of Lainey's party.  Unfortunately for US, our office did not tell the realtor that, so in the middle of Lainey's party we had to turn away the people that showed up to see the house.

BUT, it all worked out in the end.

Monday was the crazy showing I was describing in the previous post.  I managed to get the backsplash semi-finished, and we got all of our stuff stashed away.  While the buyers were late, they did arrive on the right day.  About 50% of our showings have not gone off the way they were scheduled - early by an hour, late by three, showed up during a cancellation, you get the idea.   However, because they were so late and no one called us to let us know that, Erick was home and Lainey was down for her nap.

The buyers came up from Lower Michigan and brought their out of area realtor.  They spent most of their day lost.  Oops.  Erick allowed them in, but said they could see every room but Lainey's.  So, the buyer and realtor looked around.  Apparently she oohed and ahhed over the modernness.  Ehem, I guess those little fixes DID work out.

The very next day I got an email from our realtor that she had put in an offer.  We did some negotiating and ended up fairly close to our listing price.   Our biggest concern being it is winter.  We have the following possessions currently frozen to the ground in our yard:  trampoline, camper and swing set.
We tried negotiating some extra time to get the stuff out, but the buyer wants it all gone at the time of vacancy.  So that is how it came to pass that E and I spent Saturday morning shoveling and snow blowing out half of our yard.  Luckily our snow blower is a beast.  Thanks mom and dad! 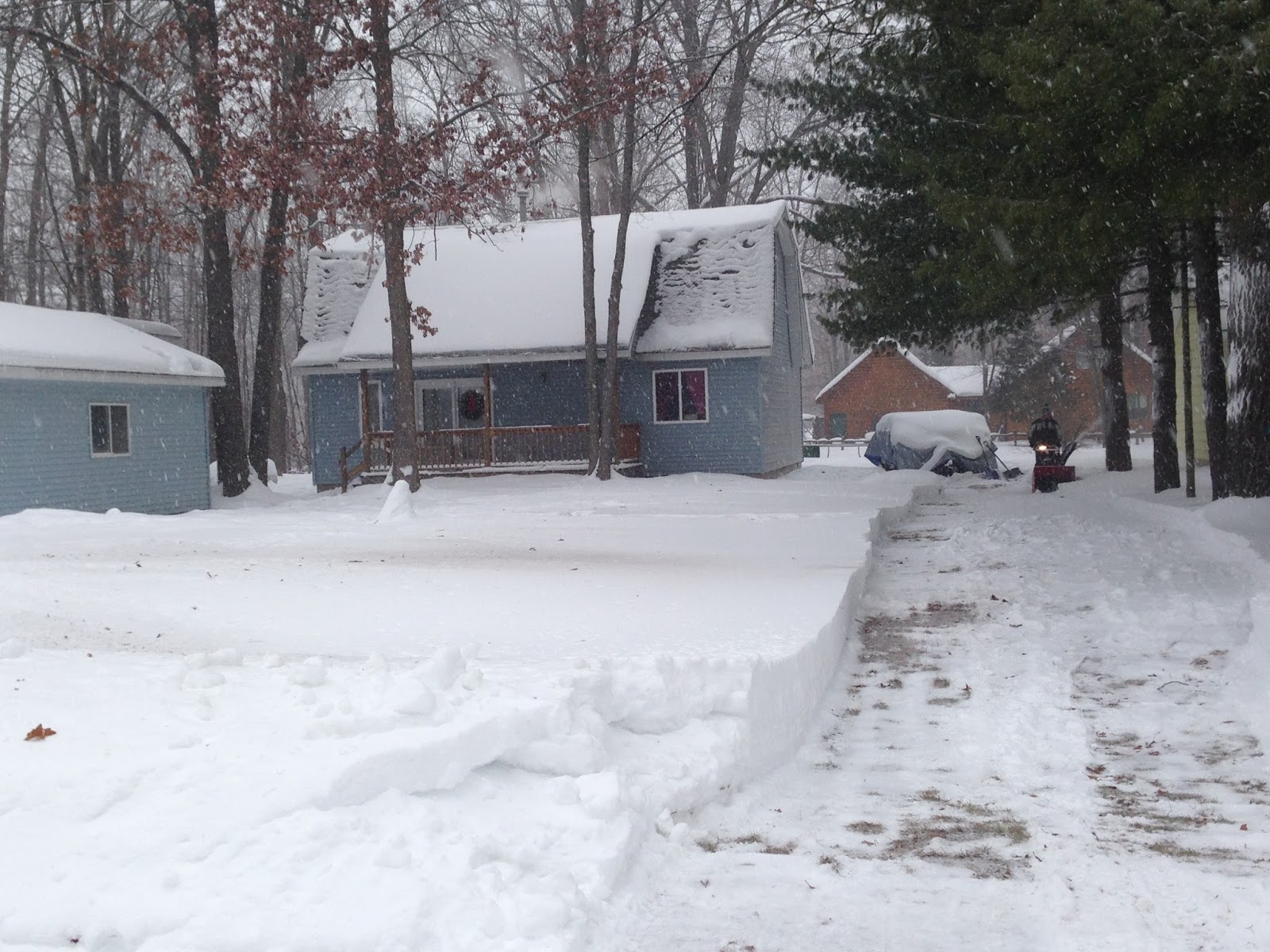 Inspection came back mostly good.  Lots of nit-picky "this is getting old and MAY need replacing" stuff.  We're in the midst of negotiating a discount there.

We are to close by February 28th and have 40 days to vacate thereafter.

Yesterday we put in an offer on a place to move into.  Slim pickins in February.  The house we picked isn't perfect, but it's budget friendly and ticks off all of the basics of our want list.  With a little love and sawdust it COULD become close to perfect, maybe.

Today I spent the day shoving toys up my shirt and down my pants to sneak them OUT of the bedrooms before the kids noticed they were missing.  Total Ninja.  I stopped when I realized the littlest was completely willing to pack up most of her toys.  The oldest obliged as well.  The middlest, he's wishy-washy.  Afterwards, I spent the afternoon getting carpal tunnel filling out mortgage forms.

Working on being zen about this whole moving thing.  The plan is to hope everything goes well, and chip away at the packing an hour or so a day.   I will do a post about my packing techniques another time.  Until then, enjoy this crazy winter.
Posted by Carrie C at 6:53 PM